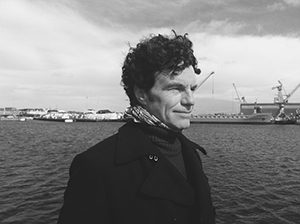 Merry-go-round rides then world tours.
More than 60 documentaries.
Editor-in-chief of Interscoop with Christophe de Ponfilly.
Books, articles for XXI and rugby chronicles for the Racing 92.
A medal of Hero of the USSR offered by a former soldier hurt in Afghanistan and the buckle of a rodeo cowboy. It was what both had more precious.
Fewer decorations than a Red Army general, in particular, the Albert Londres Prize for a report on the war in Lebanon.

To begin with, would you please introduce yourself?
My filmography does not give a full picture of what I do, and even less of who I am. I travel a lot, my thoughts ramble often, I am aware of the great fortune I have to live in a free country and to be able to express myself via singular works. I am constantly coming up with new projects and me my urge to make films remains undiminished.

How did you you become a filmmaker? Did you work in the audio-visual field or did you go to film school?
I became a director thanks to a TV program: The Race Around the World. I was 20 and studying biochemistry. During this first six-months journey, I had to send a three-to-five minute film every week, shot in Super 8, to be aired on Antenne 2. That was my school of freedom. I learned to make films by making them. I remember carefully reading my Beaulieu camera’s user’s manual on the flight to my first destination. Today, 30 years later, I feel I am still learning, and that delights me.
I must give credit to Thierry Garrel who for a long time headed the Documentary Department at Arte. As is the case for so many directors of my generation, I learned my craft by showing him my projects and my edits. Unfortunately, television has now pushed aside men and women of his caliber.

Who were your influences? What are your favorite films and why?
I remember being a child and listening to the conversations of grown-ups at the Malakoff Stadium drinks stand. These men were dreaming their lives via a soccer team’s exploits. I was also fed by my great-grandfather’s resistance stories. Later, as a teenager, I feasted on the masterpieces aired on FR3’s Ciné-Club. It was a time when public service TV had not yet renounced its mission. Today draw my inspiration from many sources: my travels, the people I meet, literature, media (both domestic and international), but also music and painting, cafes, France Culture podcasts, the Tenk documentary website (last gem seen there: Alice Diop’s Vers La Tendresse , winner of the 2016 Cesar for best short film, halfway between fiction and documentary, a great inspiration).
Filmmakers that count for me: Chaplin, Welles, Godard, Ozu, Fellini, Tati, De Sica, Leone, Wong Kar Waï, Kazan, Cassavetes, Ford, Carné, Antonioni, Becker, Bresson, Pasolini, Clouzot, Jia Zhang-Ke, Demy, Jarmusch, Lubitsch…longer yet is the list of those that feed my imagination. There is nothing I love more than discovering old or new works. To discover, to see, to see again. A cinephile’s journey is endless.

One film, only one?
I love Marcel Carné’s Hotel du Nord. I am often stunned and sometimes dazed by Jean-Luc Godard’s freedom.
According to you, is there a path that is more productive than another for a young aspiring filmmaker?
To see films, to make films, to think about them, to shoot, to edit, to show, to critique. To find’s one style, far from masters and formats. To read, to listen, to walk the streets of the world, to change surroundings. To see and make yet more films, and to know not to give up in the face of difficulties.

In your experience, is this an easy or difficult job? What (and in what order) are the main difficulties you encounter while making a film?
I feel it may be indeed easier today to make films than to work at the local supermarket or to find a job. Elsewhere in the world, some filmmakers take considerable risks in order to express themselves. In France, risks are limited. The greatest obstacles I have come across are those preceding the shooting, namely finding partnerships among national TV networks. For non-formatted projects, it’s becoming increasingly difficult, almost impossible. I have lost many of the battles I have been fighting for 30 years in order to defend creative documentary filmmaking, a singular form of authorship. But all remains possible!

Between managing creative teams at shooting time, during post-production, and juggling collaborators (notably producers), we have the sense it is a job with extremely heavy responsibilities. Can you elaborate a bit about these side aspects of the job?
For a long time, I went off by my lonesome, just me and my camera. It is good to collaborate, to team up with other pairs of eyes. Catherine Gascon, an editor in chief, has contributed immensely to my most recent films.

In addition to being a filmmaker, you also run Camera Magica, a documentary film production company. Why wear both hats, that of filmmaker and that producer?
I started Camera Magica in order to be able to make films my own way, like an artisan. I am opposed to the pre-fab mediocrity of today’s television production. Camera Magica is a tool to try to do different things differently. I am interested in fine craftsmanship.
I remain convinced that it’s with others, with collaborators, with quality partners and co-producers and ambitious projects can be made. Alone, you do not amount to very much.

New technologies are impacting the techniques of audio-visual production. Do you make films differently today than you did at the start of your career?
When I started traveling, my suitcase was full of super 8 films. In Afghanistan, tour luggage was mostly heavy batteries impossible to recharge. Film’s limited sensitivity made shooting extremely difficult, sometimes even impossible indoors.
Obtaining equipment was difficult and costly. I used the earliest Betacam cameras, “pen cameras” at once heavy and expensive. Today, there is no such thing as a bad camera. Anyone can afford them and they produce images of great quality. Any digital camera, even a good smartphone, are Rolls Royces compared to the tools we were using until recently.
There is no more (financial) excuse not to try to make beautiful things with today’s formidable tools. Your last film, Les Enchanteurs, looks at Brussels’ Théâtre Royal de la Monnaie’s Opera company, which fights and stands for a certain vision of art and culture. Do you care to voice an opinion on today’s culture? Today’s movies?
Les Enchanteurs , for me, it’s three years of work, a financial loss, and a 90-minute documentary which Arte aired at midnight with no prior press screening. When it is rebroadcast, it is listed by the various TV guides as a “Belgium concert.”
Late night showing, zero press as if to confirm the old saying that “opera interests no one.”
Marketing and formatting are now the ruling masters of television, of cinema, and of other art forms. The format is art’s opposite.
As is said in the film, “what happens here is bigger than the stage.” Les Enchanteurs aims to say that culture, even in an opera house, is not a varnish reserved to the privileged few. Culture is an essential link between humans and has been since man has been a man. Homo Sapiens tells stories and paints the cave walls.
Andre Tarkovsky’s Andrei Rublev makes the case for art’s legitimacy in a world sick with evil. “The more evil there is in the world, the more reasons there are to make works of art.
Through art, man expresses hope, all else is of little importance,” said Tarkovsky.
(French national network) TF1, whose business model is now dominant, sells available brain time to Coca-Cola, but Roublev picks up his brushes to make a masterpiece. Obviously, and it is a struggle, better Rublev than Coca-Cola. Better Jean Vilar and his desire to bring the best of culture to the greatest number of people possible than TF1’s contempt for their audience.

After 30 years of work and several prestigious prizes and awards for your films, how do you manage to keep the same level of inspiration you had at the outset? What are your next projects?
After years of research, my palette continues to expand. What remains to be painted and made is infinite, as is inspiration.
At the same time, the size of the window through which we make and show our films has shrunk. But other windows are opening up, I remain optimistic. The sellers of “available brain time” will lose in the end. Their contempt for the public is mistaken. All remains to be done, and I have never felt more eager to pick up my brushes. In my search for a handwriting, the anesthetic to show the world, I remain an apprentice.